For all you fellow ‘tech-heads’, this article and video is for you. (wink).  Enjoy!

The integration enables Celsius to create wrapped versions of popular tokens including ADA, DOGE and ETH for use on Polygon.

Celsius and DeFi engineering arm CelsiusX will integrate with Chainlink Proof of Reserve to create wrapped versions of tokens such as Cardano, Dogecoin and Ethereum in a bid to unlock cross-chain liquidity.

Following the initial integration, Celsius will then work rapidly to expand its wrapped cross-chain token offerings and supported blockchains in the near term given the flexibility and adeptness of Chainlink’s proof-of-reserve (PoR) architecture in onboarding new assets and chains.

The integration will be one of the first instances of Chainlink PoR being used to help secure the on-chain minting, redemption and burning of wrapped cross-chain tokens – which are tokens pegged to the value of the original asset and created for use on non-native blockchains. 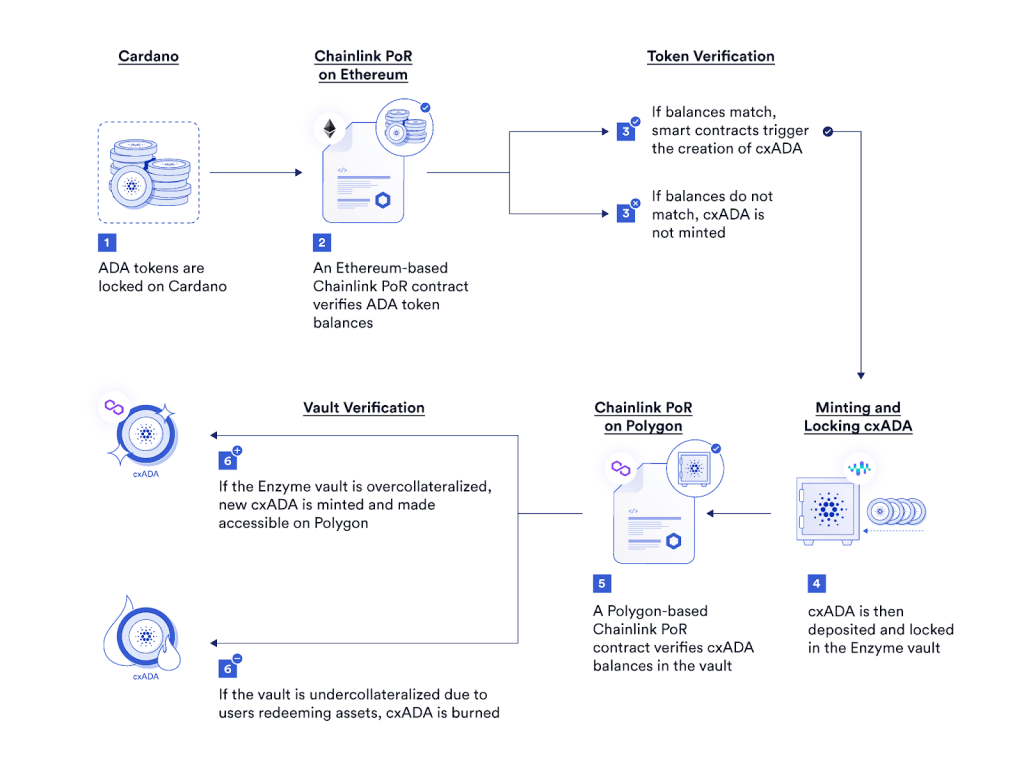 An in-depth look at how Celsius will use Chainlink PoR to help secure wrapped ADA (cxADA).

Chainlink PoR will help CelsiusX create and secure wrapped versions of assets such as ADA (cxADA) by ensuring that the minting process of tokens is done in a verifiably sound manner.

First, it ensures that the correct amount of tokens are minted by Celsius by verifying whether enough are available in reserves. Secondly, the reserves are fully audible and verifiable in real-time via CelsiusX’s reserves dashboard.

In addition, developers can also integrate Chainlink PoR feeds into their smart contracts to act as an ‘early-warning system’ if reserves become too low.

Carl Hua, Head of CelsiusX, commented on the upcoming integration and its value to the DeFi and engineering arm of Celsius.

“Unlike other wrapping infrastructure providers, CelsiusX embraces transparency to eliminate the need for third-party trust,” he said.

“Chainlink is a key infrastructure partner to facilitate that transparency, with Proof of Reserve providing a real-time view into the liquidity and collateralisation of wrapped tokens.

“In the future, CelsiusX will adopt Chainlink CCIP as the core infrastructure for decentralised cross-chain bridging. This will be cutting edge infrastructure to set up multi-chain expansion.”

Disclaimer: The information provided on this page does not constitute investment advice, financial advice, trading advice, or any other sort of advice and it should not be treated as such. This content is the opinion of a third party and this site does not recommend that any specific cryptocurrency should be bought, sold, or held, or that any crypto investment should be made. The Crypto market is high-risk, with high-risk and unproven projects. Readers should do their own research and consult a professional financial advisor before making any investment decisions.

The Digerati Premium
Jan 26, 2022 2 min read
Have A Story? Get Featured On Celsiuscow Plus 100+ More Exclusive Crypto News Sites Tell Me More !