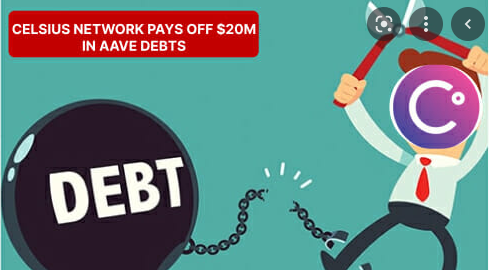 Amidst the roaring blood-red seas of the ongoing crypto lending space turmoil,  embattled crypto lender Celsius Network is inching closer to fully paying off its loans from decentralized finance protocols, reducing its outstanding debt to $59 million. 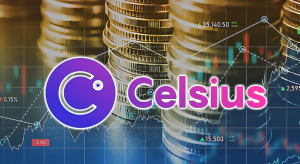 Celsius, one of the crypto lenders facing liquidity troubles in the industry’s ongoing credit crisis, appears to have yet again used a maneuver on a decentralized finance (DeFi) protocol to free up hundreds of millions of dollars of trapped collateral.

Transactions on the blockchain show that a wallet linked to Celsius transferred $81.6 million in Circle’s USDC stablecoin on Tuesday to the automated decentralized lending protocol Aave. The move reduced Celsius’s debt to Aave to $8.5 million.

Crucially, the transfer freed up $410 million in stETH, a type of staked ether token that Celsius had pledged as collateral against the loan on Aave. The stETH tokens are a derivative version of the Ethereum blockchain’s native token ether (ETH); each stETH token represents 1 ETH locked up on Ethereum’s upcoming proof-of-stake network.

The stETH token has been at the epicenter of the liquidity crunch in crypto markets after its price deviated from the supposed 1-to-1 peg to ether. At press time, stETH trades at about 3% discount compared with ETH.

Celsius is one of the largest single holders of stETH, with at least $426 million of the tokens, according to blockchain data firm Nansen’s portfolio tracker. The stake represents almost a tenth of stETH’s total market capitalization, at $4.4 billion.

Celsius, which at one point managed over $20 billion of client deposits, is one of the crypto lenders that suspended withdrawals to prevent a run on its deposits. It also laid off 150 employees and hired restructuring advisors, as CoinDesk reported.

The down payment represents another maneuver by Celsius to reclaim collateral by paying down debt to decentralized finance (DeFi) protocols.

Last week, Celsius paid off its $228 million debt to Maker, another DeFi lending platform, and got back $440 million of collateral in the form of wrapped bitcoin (WBTC), a BTC derivative, blockchain data shows. After that, Celsius started to make good on its loans from Aave and Compound, paying down $95 million of the debt by Monday.

At press time, Celsius still owed $59 million to DeFi protocols, according to data on crypto data tracker Zapper: $8.5 million to Aave and $50 million to Compound, with $28 million and $199 million locked up on the platforms, respectively, as collateral, denominated in various tokens.

Should Celsius pay off the remaining debt, it could theoretically reclaim the combined $227 million of digital assets to boost its liquidity.

-Via: Celsius Reclaims $410M of ‘stETH’ Tokens After Paying Down $81M Debt to Aave

Don’t forget to share and tag this update with your fellow crypto die-hards!

*Vested Interest Disclosure: The author is an independent contributor publishing via our brand-as-author program. Be it through direct compensation, media partnerships, or networking, the author has a vested interest in the company/ies mentioned in this story. CelsiusCow.com has reviewed the story for quality, but the claims hereon belong to the author. #DYOR