Should I Press the PANIC Button? Crypto and Tech Stocks Crash – What is REALLY Going On? 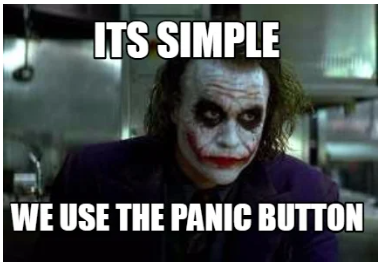 OK. To say that there’s “blood in the streets” right now, is a blatant understatement.

Not only in the obvious political and economic space,…

But in a truly global umbrella space, affecting us all…. BIG and small.

We’ve been holding our breath, and holding back from expressing our concerns regarding this matter since the turn of the year.

However, after reading this received email piece below, (in conjunction with pure observation of the current world stage) from natural resources investment legend, Marin Katusa, we can no longer keep shut. 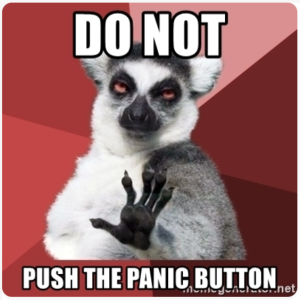 The global rout in stock markets has erased $11 trillion in value in just 5 short weeks.

…All set us up for a crash.And it’s all happening in Real-Time… Now.In the United States, the S&P 500 is getting close to bear market territory. As of this writing, it’s down 19% from its 2021 high. 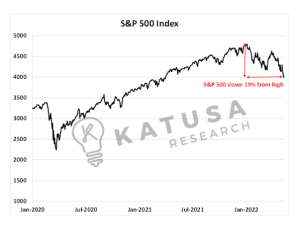 Below is the 1-year forward price to earnings ratio for the S&P 500. 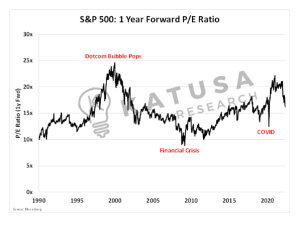 Given all the uncertainty in the world right now, it seems plausible that the S&P 500 should reflect that and should trade at best on par with its historical average.

Though one could certainly make the case it should be trading significantly lower.

Investors around the world are getting defensive…

Investors who are bullish buy calls.

And those who are bearish typically buy puts.

The chart below shows the ratio of puts purchased to calls purchased for US, Japanese and European markets. 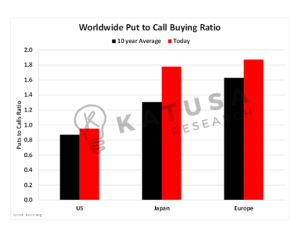 Around the world, investors are buying more puts on average than usual, with all 3 major markets seeing more put buying than the 10-year average.

Diving under the hood of the S&P 500, we can look at the sectors which are receiving the most dollars invested right now.

In the chart below you can see the massive spikes in P/E for the consumer discretionary sector.

This is composed of companies that provide products to consumers which they don’t need to sustain themselves.

Contrary to the consumer discretionary is the consumer staples segment, which includes companies that produce goods which we need on a regular basis.

On the other hand, consumer staples are seen as a “safe haven” and money is flooding into the segment. Pushing the P/E ratio up to its highest levels since the dotcom bubble popped. 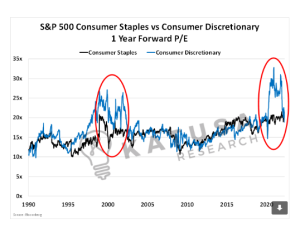 What are Investors Buying Right Now?

For this, I’ve taken a lot of heat…Insults…

But I don’t care.

I’ve said it many times and got laughed at.  But proven correct:  the U.S. Dollar remains a haven.

And I believe will remain so for at least the remainder of the year.

The U.S. Dollar is up 6.4% for the year versus other major currencies. 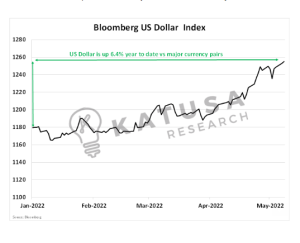 Whenever I say that I get the counterargument that “cash is losing to inflation”.

That’s true.  But the amount of share price destruction is greater, and without cash, an ‘alligator investor’ (like us) cannot pounce on opportunities.

Just like in the past crises Federal Reserve or the U.S. Dollar.

The U.S. Dollar has and remains my currency if choice and it’s where I keep the bulk of my cash.  Yes, even though I’m Canadian.

But Marin, Bitcoin Fixes This…

Other “stores of value” such as bitcoin have taken it on the chin.

I have no qualms with bitcoin and consider it an asset class, but I see it more as a risk-on asset, rather than a risk-off.

This is coming to fruition here as it is flirting with a long-term support point at $30,000.

Will it hold?  We will see, but things don’t look good in crypto land…

Just like junior resource exploration, stocks that go liquid, if Mother Bitcoin drops further, many crypto coins (and even NFTs) could get illiquid fast. 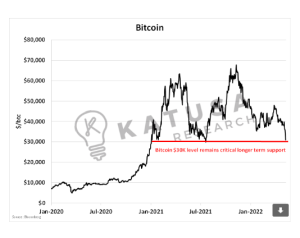 Stagflation is a topic I have addressed multiple times to my premium subscribers and see this as a continuing trend in the near to medium term.

Doesn’t this sound familiar with what we have today?

Sure does to me.  But don’t get stuck into a framework.

Right now, though, inflation around the world is high.  and well above the target levels of central bankers.

Economic growth is slowing due to the war in Europe, supply chain issues, a stronger U.S. Dollar, and COVID outbreaks in China.

To combat this, bankers are going to try to raise rates and pull back on the flow of “money” to slow inflation.

This is a standard play in the playbook.  However, what is not in the playbook is weening the world off the Financially Transmitted Disease known as ZIRP or zero-interest-rate-policy.

The global markets for the past decade are used to, or let me out it differently, addicted to massive amounts of cheap or even free capital.

This era has ended, and many businesses and individuals are not set up to survive a plethora of rising interest rates and a rising U.S. Dollar.

The focus is to practice ‘alligator investing discipline’ and how to keep  your head while others are losing theirs.

We’ve come to crossroads in many markets, and the most important thing is to own only fundamentally valuable companies and to have CASH available as attack capital.

If you were/are caught off guard in this recent correction…

Want to add some defense to your portfolio, or are looking to gain an edge over the long term…consider  learning more about Marin’s research service, Katusa’s Research Opportunities.

And remember, the markets can stay irrational longer than you can stay solvent.

« Is Celsius CEO Mashinsky Lying About Funds Being Safe? – (In Crypto, No Money is Safe)
Will Celsius Coin Crash to ZERO? | CEO Alex Mashinsky cites ‘Wall Street Sharks’ and Short Sellers as CEL Price Drops from $8 June-2021 High to 80 Cents »