WHAT!? The “Smart Money” was Duped by Celsius Network Too? | Is the Crypto Loan Concept Just One Big Lending Scam!? 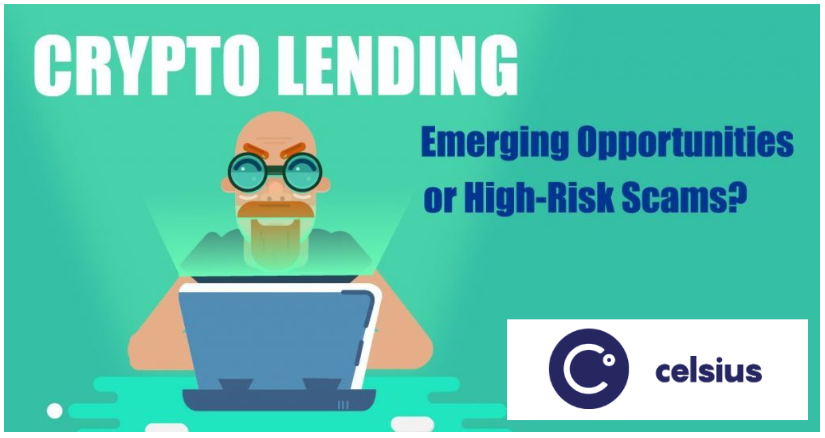 Are YOU one of the hundreds/thousands of crypto loan clients who lost (or stranded) any of your crypto funds on either of these 2 large crypto lending platforms?

Another day, another blowup in the hype-driven world of cryptocurrency lending.

And this time there’s a cautionary tale where even sophisticated bankers and pension funds were vulnerable to crypto’s Fear Of Missing Out (FOMO) chasing unrealistic rewards in the unregulated world of “decentralized finance.”

Celsius Network Ltd.’s freezing of withdrawals, swaps and transfers on its platform Monday came just weeks after the $60 billion implosion of stablecoin Terra, and barely a day after Celsius boss Alex Mashinsky dismissed talk of halted withdrawals as “misinformation.”

Even before selling pressure began to batter DeFi platforms, regulators had been ringing alarm bells on Celsius for some time. The platform, which in 2021 said it had over $20 billion in crypto assets and 1 million customers, was hit by actions from several US states amid scrutiny on whether interest-bearing crypto accounts ran afoul of securities laws.

With lucrative yields of up to 18%, those warnings were easily ignored — even as terms clearly stated that collateral posted on the platform may not be recoverable in the event of bankruptcy. 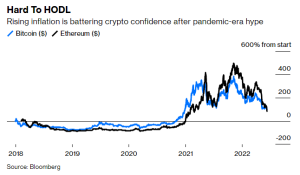 Yet the FOMO that won over punters seems to have also worked its magic on professional financiers, too.

Those apparently unsustainable rewards appeared to sway those in charge of Quebec’s 420 billion Canadian-dollar ($326.7 billion) pension fund, which together with venture-capital firm WestCap Group led a $400 million investment valuing Celsius at $3 billion last year — even after the US warnings.

Not to mention the move by Royal Bank of Canada’s former chief financial officer, Rod Bolger, to take up the same position at Celsius in February — replacing an executive who was suspended after his arrest in Israel in connection with suspected fraud. (He rejected the allegations.)

The official view from the Caisse de Depot et Placement du Quebec (CDPQ) at the time of its reported $150 million investment was that this was a bet on the disruptive potential of blockchain technology — or, as the Quebecois say, “les chaines de blocs.”

Those rewards seem to have drowned out the risks of DeFi’s bank-like products that lack bank-like oversight. Such risks include the panic spiral of falling prices, forced selling and bank-run-style loss of confidence that would stretch a lending business to the limit.

And the excitement of what CPDQ called a hunt for a crypto “diamond in the rough” also seems to have relegated US fears over Celsius to the background.

Now, to be clear, it’s easy to criticize in hindsight. This is only a drop in the ocean of the crypto market, which exceeded $3 trillion in November but slipped below $1 trillion Monday. “Our team is closely monitoring the situation,” the Canadian pension fund said in a statement.

Still, even in calmer times, Mashinsky’s own description of Celsius’s business model last year showed the pressure to keep swinging for the fence: With more than 100,000-115,000 bitcoin held in return for 6-7% interest rates, the platform had to generate 6,000-7,000 bitcoin “just to break even” with customers, he explained — hence expansion into Bitcoin mining, a capex-heavy and competitive business, and plans for a credit card.

For a pension fund unable or unwilling to directly touch cryptocurrencies, this kind of business might have seemed like an ideal “picks and shovels” play — especially at a time of low interest rates. But even then, only after gulping a fair amount of blockchain Kool-Aid and ignoring the rumblings of concern from watchdogs.

As for Bolger’s own view of his move to Celsius as CFO, it includes pride in “a world-class risk management team” using practices “similar to other large financial institutions” — and also a hefty dose of optimism that crypto lending reduces “barriers” to finance. None of that is on display today.

He wouldn’t be the first banker to be tempted by the lure of crypto riches: The prospect of fewer regulatory constraints and more money has seen plenty of finance workers switch jobs. The staff flows from banks to fintech firms between 2020 and 2022 are revealing, such as the 37 Goldman Sachs Group Inc. employees who moved to Coinbase Global Inc.

Even as crypto dominoes topple, the pressure on banks and funds to clamber onto the crypto and DeFi train won’t go away easily: JPMorgan Chase & Co. wants to bring “trillions of dollars” of assets into DeFi, and PWC’s annual crypto hedge fund report this year found more than 40% of funds used borrowing and lending to juice returns — perhaps one reason why Mike Novogratz thinks two-thirds of crypto hedge funds will fail.

Yet the irony now is that as regulators sift through the wreckage, they’ll seek to make DeFi look more like banking — with the higher costs, lower profits and increased box-ticking that implies. ING Groep NV economist Teunis Brosens says of Celsius: “If this does not illustrate why crypto regulation is welcome, I don’t know what does.”

When the first banker moves back to TradFi from DeFi, we’ll have Quebec’s pensioners to thank.

-Via: Celsius Crypto FOMO Proved Irresistible to Finance Pros Too

« The SHOCKING ‘Real Cause’ of the TerraLUNA/USDT Meltdown | Is Celsius Network Squirming Away from Blame? Observe This Intriguing Theory…
In Defense of the Viability & Durability of the Celsius Network (CEL), Here is the Team’s Timely FAQ’s Page to Address Client Concerns »